The next stop on our journey is Rio de Janeiro, Brazil.  This World Wonder, the statue of Christ the Redeemer, is located at the summit of Mount Corcorvada, overlooking the city. While it is the youngest of our seven wonders, it is no less spectacular.  The statue’s gesture is viewed as one of peace & welcoming. 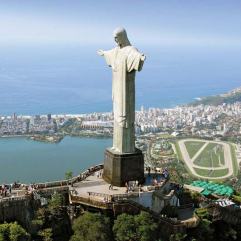 Here are some interesting facts about the statue of Christ the Redeemer: